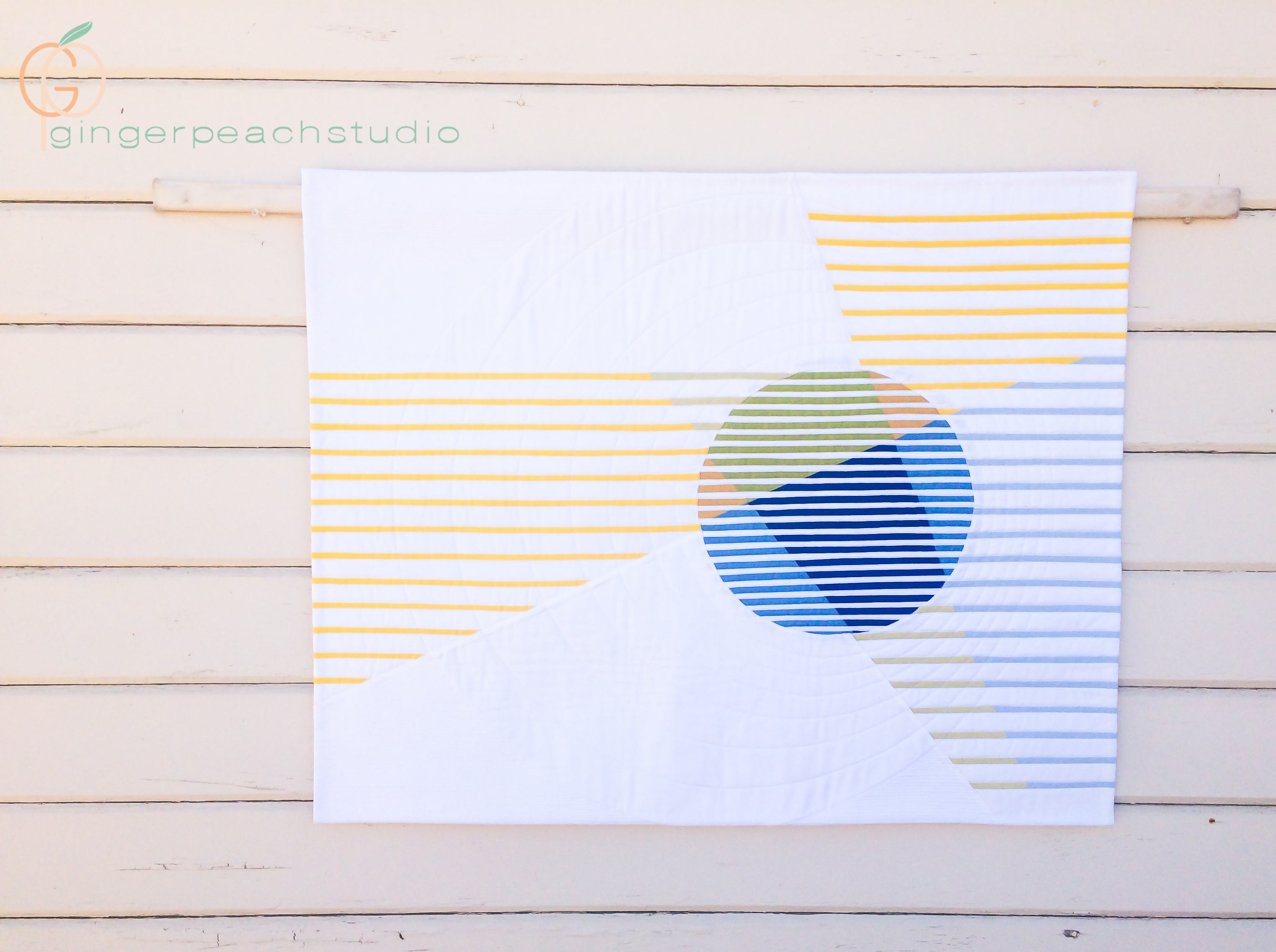 I have this tendency to bite off way more than I can chew. I do it all the time and I never really seem to learn my lesson. It is both a blessing and a curse. I say it’s a blessing because when I’m under pressure and I really sink my teeth in, I often feel the result is some of my best work. It’s a curse because the flip side is it usually brings about unnecessary or avoidable stress. The way this piece came to be is because of this somewhat frustrating character trait of mine. 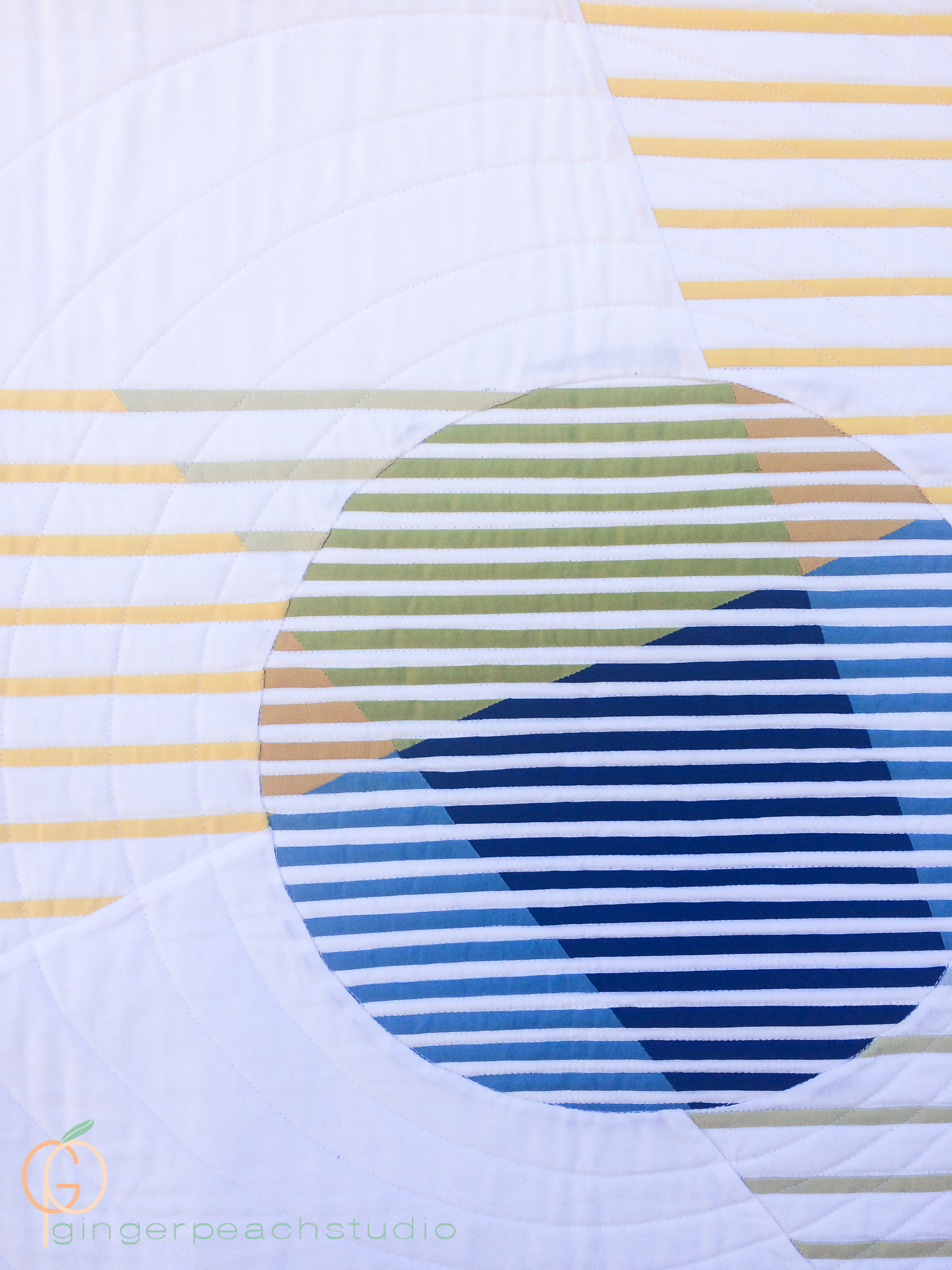 A few months ago I discovered Katie Pasquini Masopust and became enamored with her work. She is a brilliantly talented quilt quilt artist and author. I decided I must study under this person and as luck would have it, she teaches online classes via email. “How perfect!” I thought to myself and emailed her immediately asking if she would notify me as soon as there was space in one of her classes. I’m not exactly sure how much time went by but it was at least a couple months before there was room for me. I had sort of forgotten about it all when I received an email telling me that registration had opened again and as soon as enough people signed up, instruction would begin. I was thrilled and signed up immediately expecting things to get going pretty soon after that.

It took a bit more time for instruction to begin but when I got my first assignment I dove in head first and poured all, and I mean ALL my creative energy into it. I was all but completely consumed with either working on it, or thoughts of working on it for a over a week. I was up late almost every night and up early just so I could finish in time. That assignment is called Abstract Color Wheel (not yet blogged, but soon). Lines Lost and Found, the project posted here was assignment number 3. Forgive me for posting out of order. 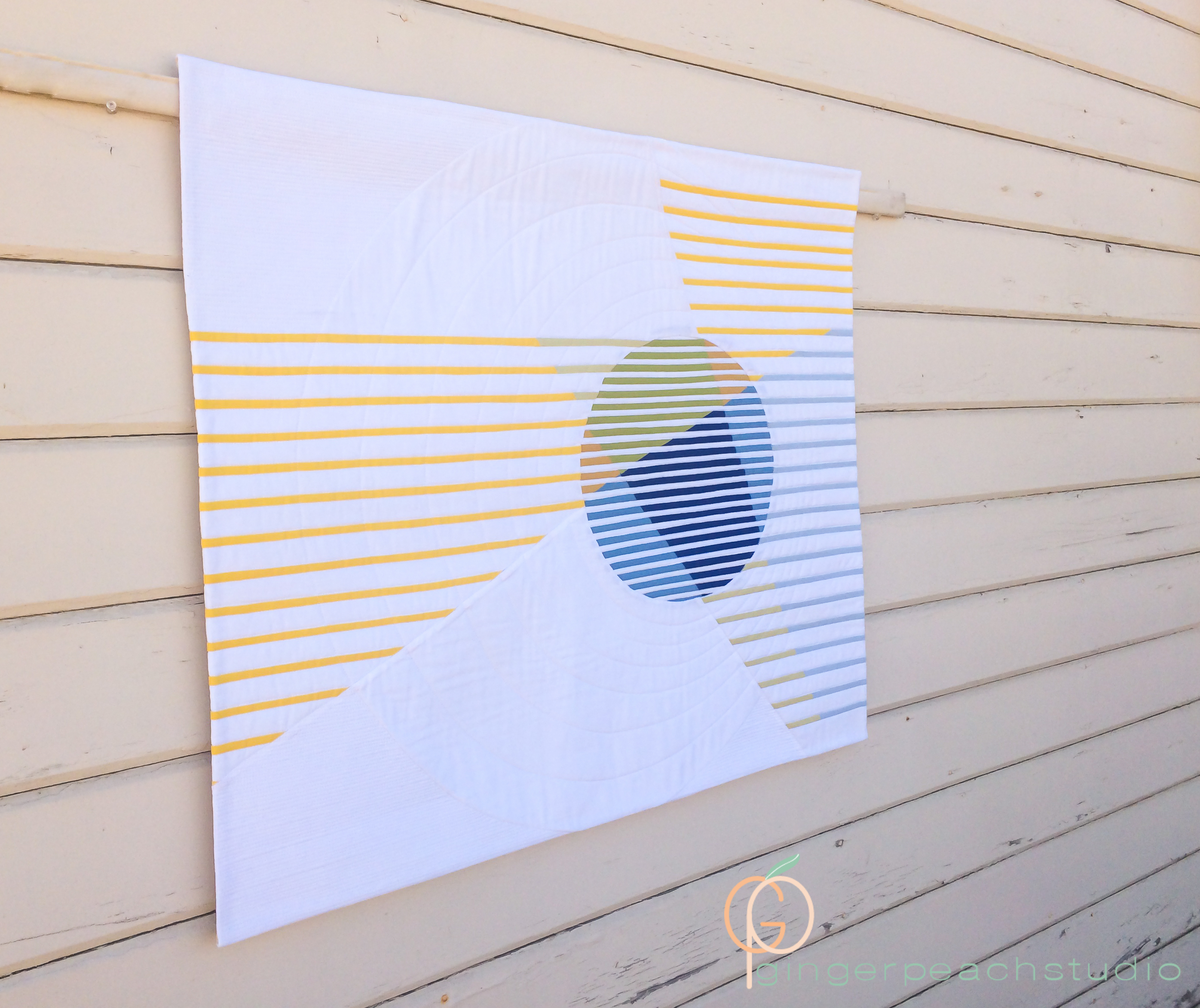 For this piece our assignment was to explore the idea of how to convey hard and soft edges of forms in quilting. Hard and soft edges in artwork go a long way to create depth, draw attention, and bring into focus specific elements the artist wants to clearly convey. This is especially challenging in the craft of quilting because a sewn seam almost always creates a hard edge. This is often true even when the contrast between two adjoining fabrics is very subtle. The challenge is finding ways to soften edges of forms to enhance focal point(s) and add depth to your work. I struggled with how to approach this assignment much more than the first two, which were color and composition driven. 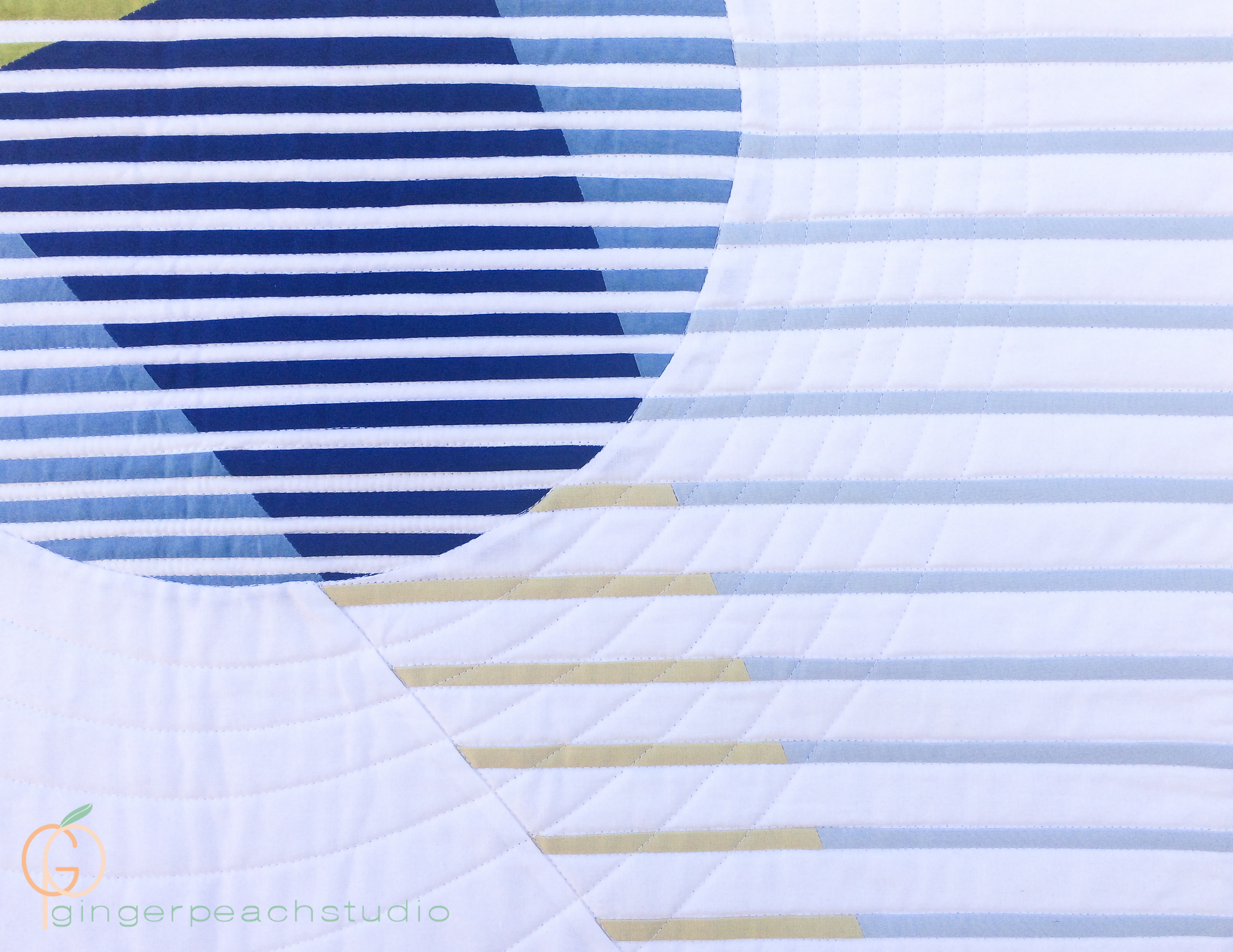 Initially my plan was to do some sort of still life photo with appliqué and use color to soften the lines of my subject. The problem was that I wasn’t sure how to execute that idea since I have never made a literal picture quilt and I only had two weeks to complete the assignment. So I scrapped that idea, thinking I needed to come up with something more familiar. I sat down at my computer and started drawing simple shapes, using the following two images as inspiration. 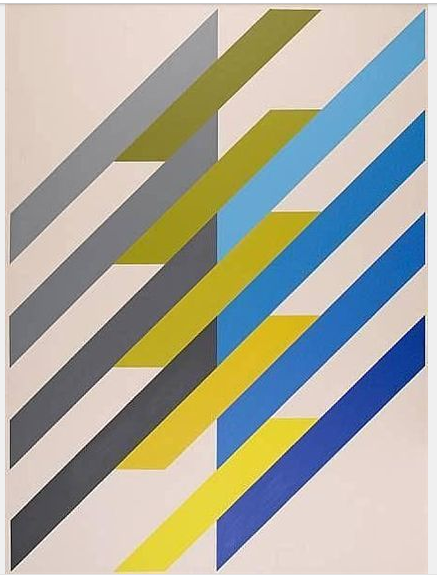 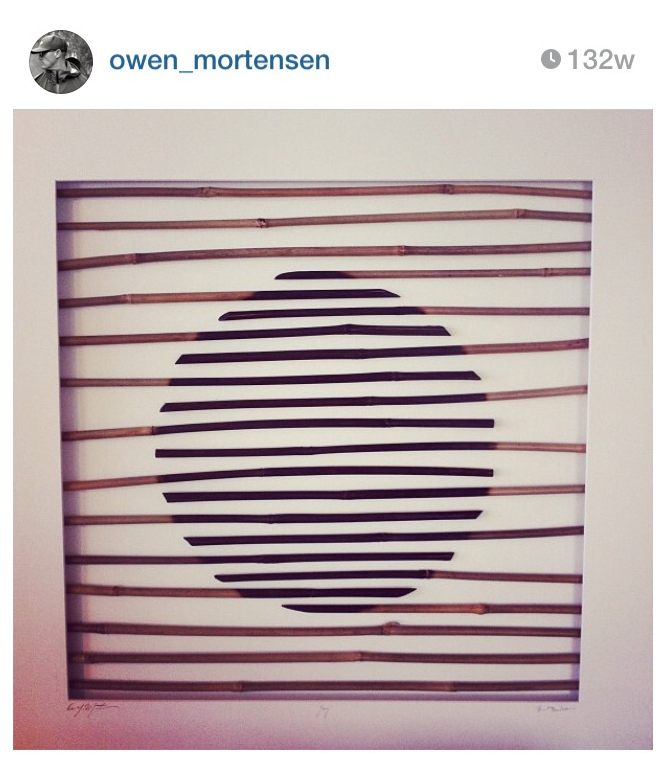 I design almost every quilt I make in Adobe Illustrator. I love using technology rather than just my hand drawn images for multiple reasons. First, I’m terrible at drawing. So there’s that. Second, in Illustrator its easy as pie to draw precise shapes and move them around at will. Throw in the ease of color manipulation and its a designer’s dream. I can play with color super fast, get exact measurements, and know exactly how the piece will look when it’s completed. Technology is magical. This is the digital image I came up with. 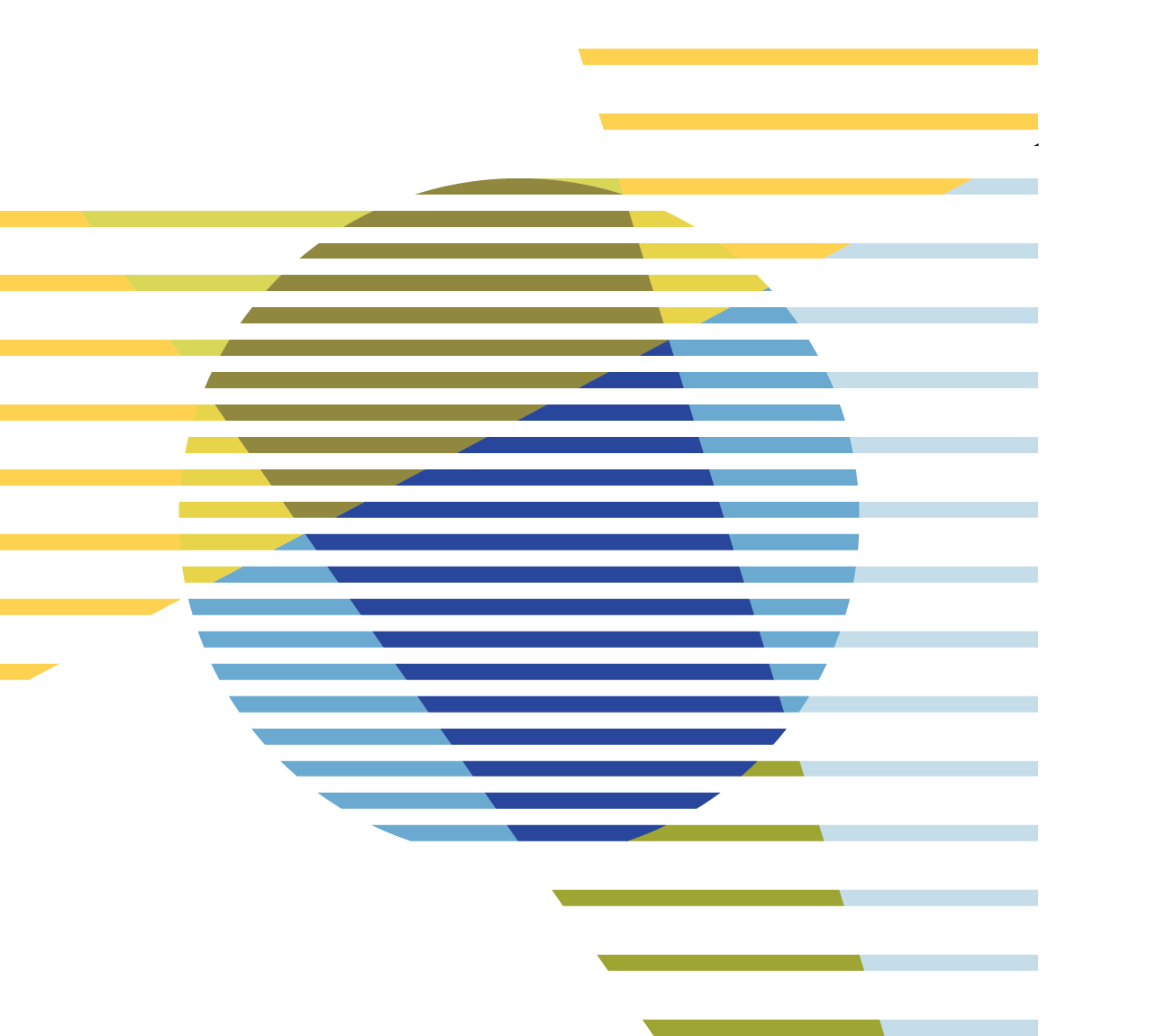 Perhaps less magical though, depending on your perspective, is what happens when you take an abstract idea in digital form and try to bring it into real and physical existence in an analog world. I say less magical because everything is just so easy on the computer screen. Effortless. Perfect. Draw a circle, draw some lines, color them in, voila! I’m oversimplifying but you get the idea. I drew the image and said to myself, “This is pretty good…I think this is the design I want to do…NBD.” 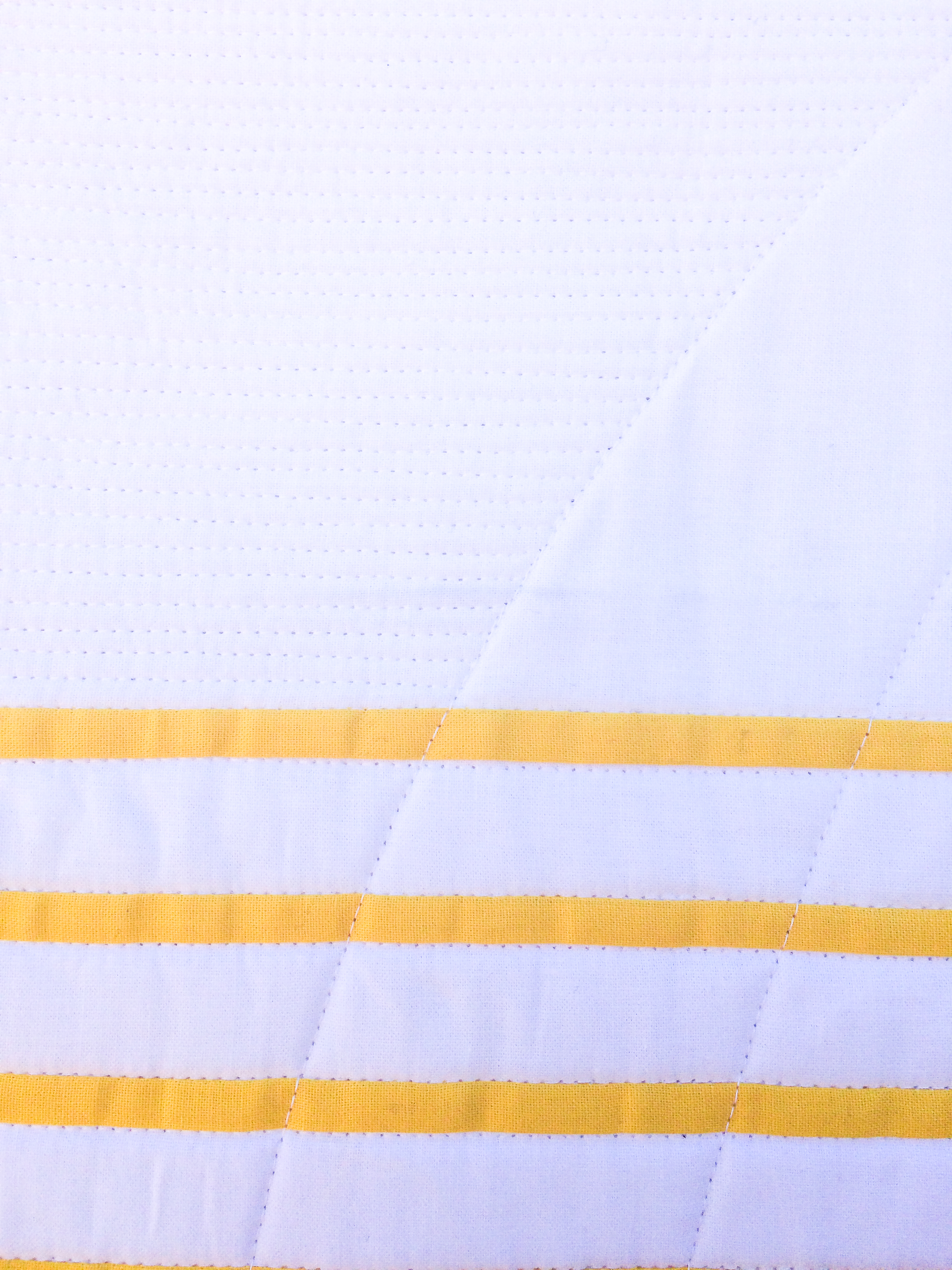 That’s when it happened. Right there. That was the moment when I disregarded real world logic and decide to do this design rather than a still life because this would be “easier”. It retrospect the absurdity of it actually makes me laugh because despite its small size (28″x35″), this was easily the most difficult and challenging quilt I have ever made. I completely underestimated how difficult it would be to execute these precise lines. In fact, if you look closely you will see that despite my best effort some of my lines are not perfectly straight. This bothers me some but for a first go at this technique I feel like I did a pretty good job. Plus it gives me something to work toward and I do love a hearty challenge. I would venture to say challenge is usually the primary motivating factor for me. Often trumping beauty, form, and function. Sometimes I just want to see if I can do it. 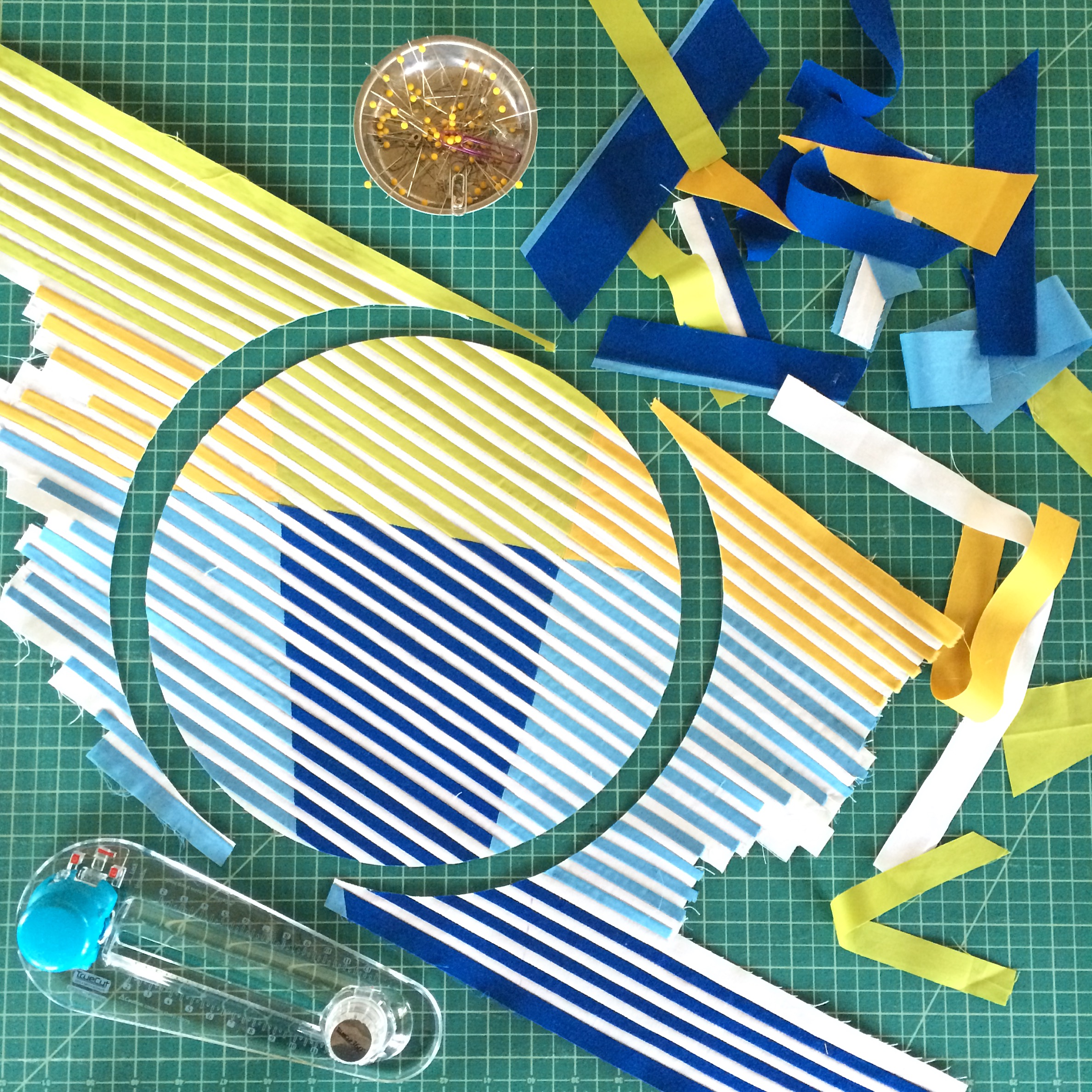 I started with the circle, building it line by line, one stripe at a time. I realized early on that if the the piece was to have the effect I desired, all of the white background would have to be as continuous and smooth as possible. I wanted there to be absolutely no lines/seams where white meets purely white. This was the real challenge I faced. I made the circle first, then the surrounding space. Then joined the two pieces by reverse appliqué. You can see more progress photos on Instagram, #lineslostandfound.

So what was the real lesson here? Of course I explored the concept of soft and hard edges in quilt making. I suppose that’s the “face value” answer to that question. I love how the lines converge to create the hard edge of the circle. One of the more unexpected outcomes was how the difference in angle of the lines that run off the edge of the quilt affect the softness of the line. Wider angles yielded softer lines as did more subtle color changes. But what’s the real lesson though? The one in self discovery and deeper personal understanding. 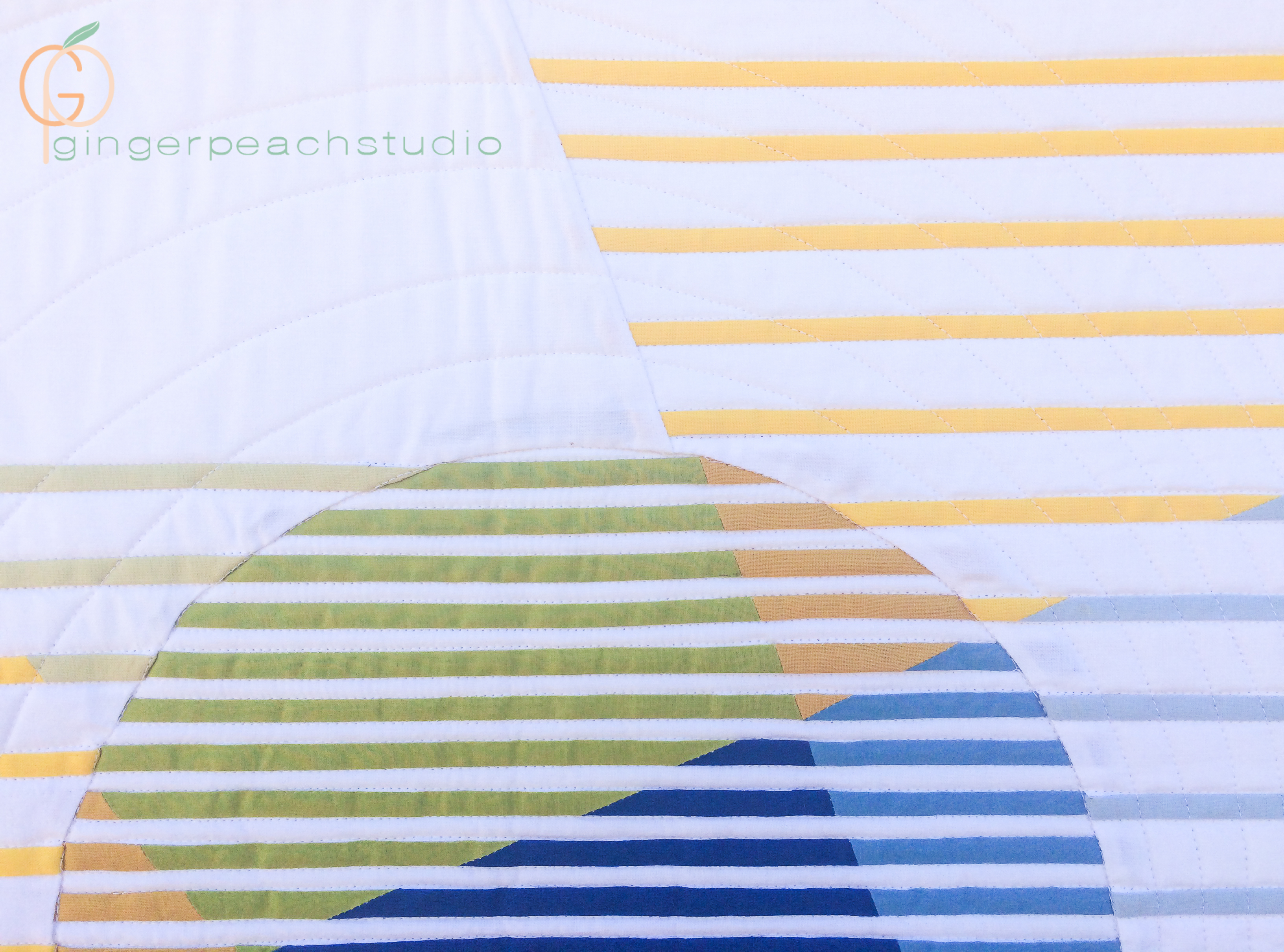 It has become so easy for me at this juncture of my life and time in history to oversimplify something based on its initial appearance. We live in a busy world. Time rushes by and overconsumption of media and fast-paced movement from one thing to the next has truncated my ability to accurately assess things without pause. It becomes all too easy to reduce an idea down to a single image. The real tragedy is that likewise, people can be reduced to a stream of curated images. Although these images can tell you a lot about who they are, it’s impossible to get the full story. Everything moves so fast. This is hard to admit but I think I often merely accept the Cliff’s Notes version of people and things and move on. I exist in a hurried state of bouncing from one thing to the next. Must finish this project, must start on that one. Don’t get me wrong, I love my work. It fulfills me in ways I can’t fully describe, but I do not pause to fully reflect on it enough, or the people I encounter through it. Hence, the reason I blog so infrequently. I think perhaps though we live in this magical time of technological connectedness, my flawed self naturally condenses much of what I see into a version of understanding it that allows for the fastest processing possible, then moves on for fear of being left behind. My goal moving forward is to be more present and more transparent both in my work, and in my personal relationships. I hope to remember that even though I sometimes loose sight of the line between the digital world and the real one, I need not fear because If I pause for a moment and pay attention, I know I will always find it again. 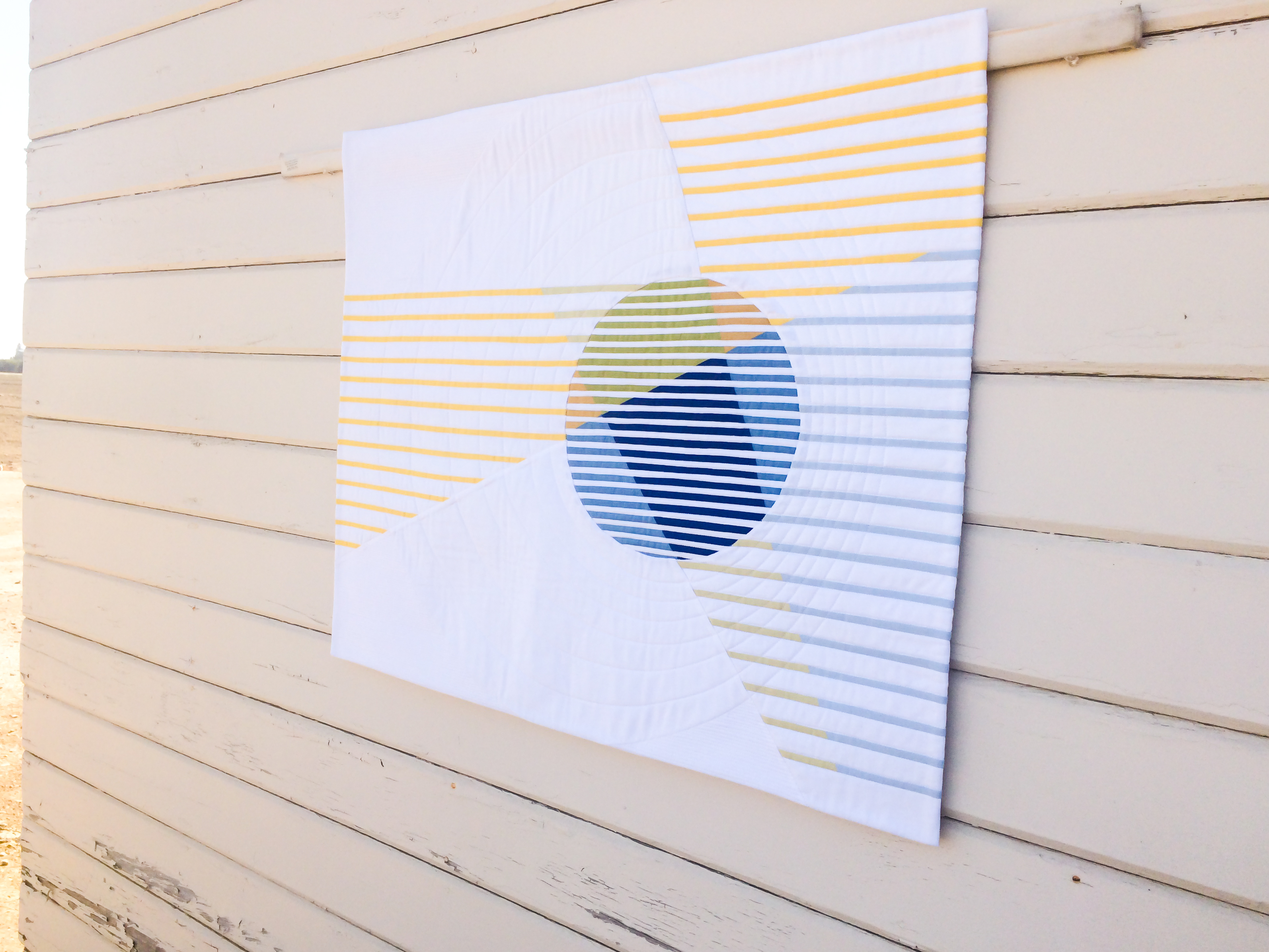 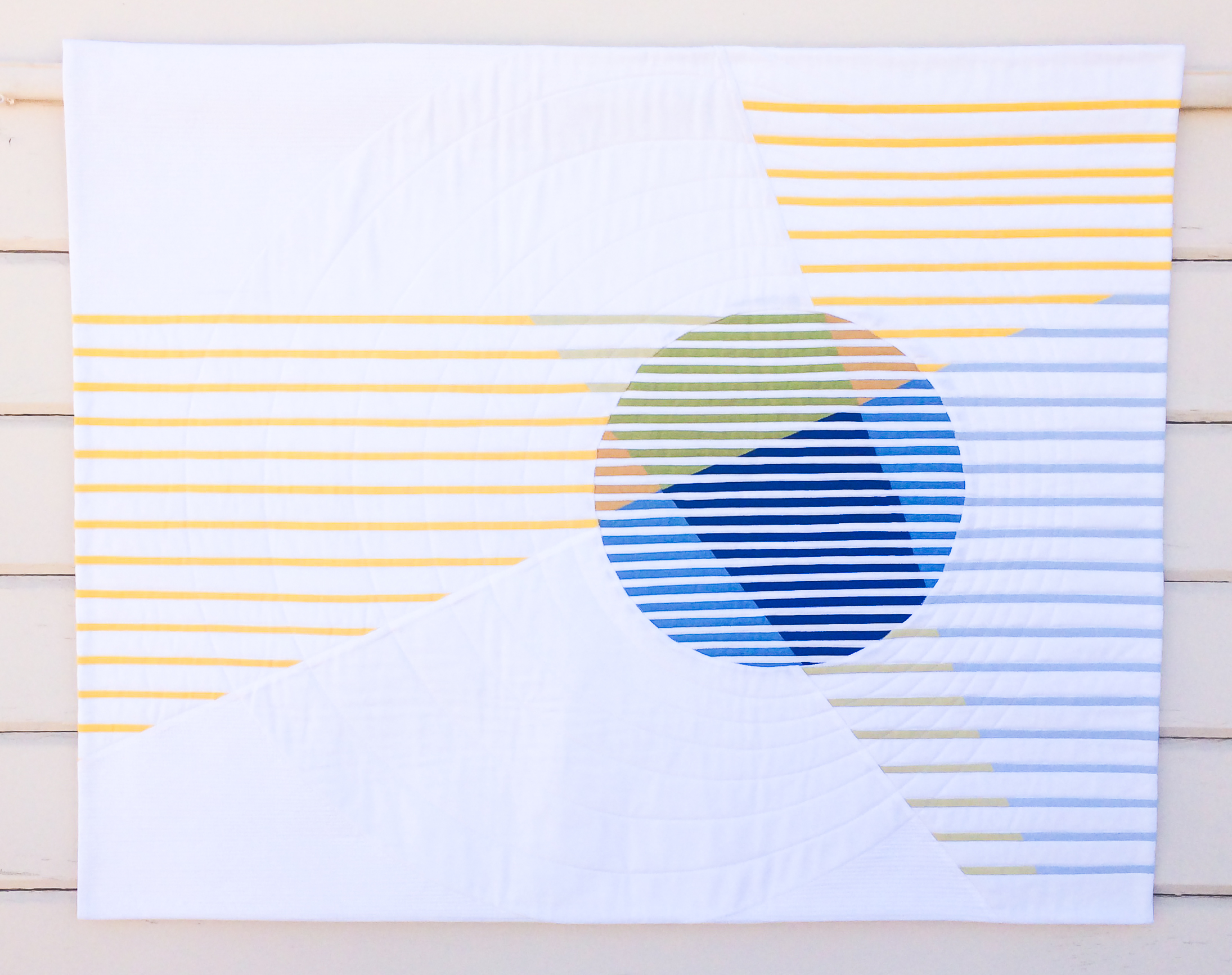 11 comments on “Lines Lost and Found” 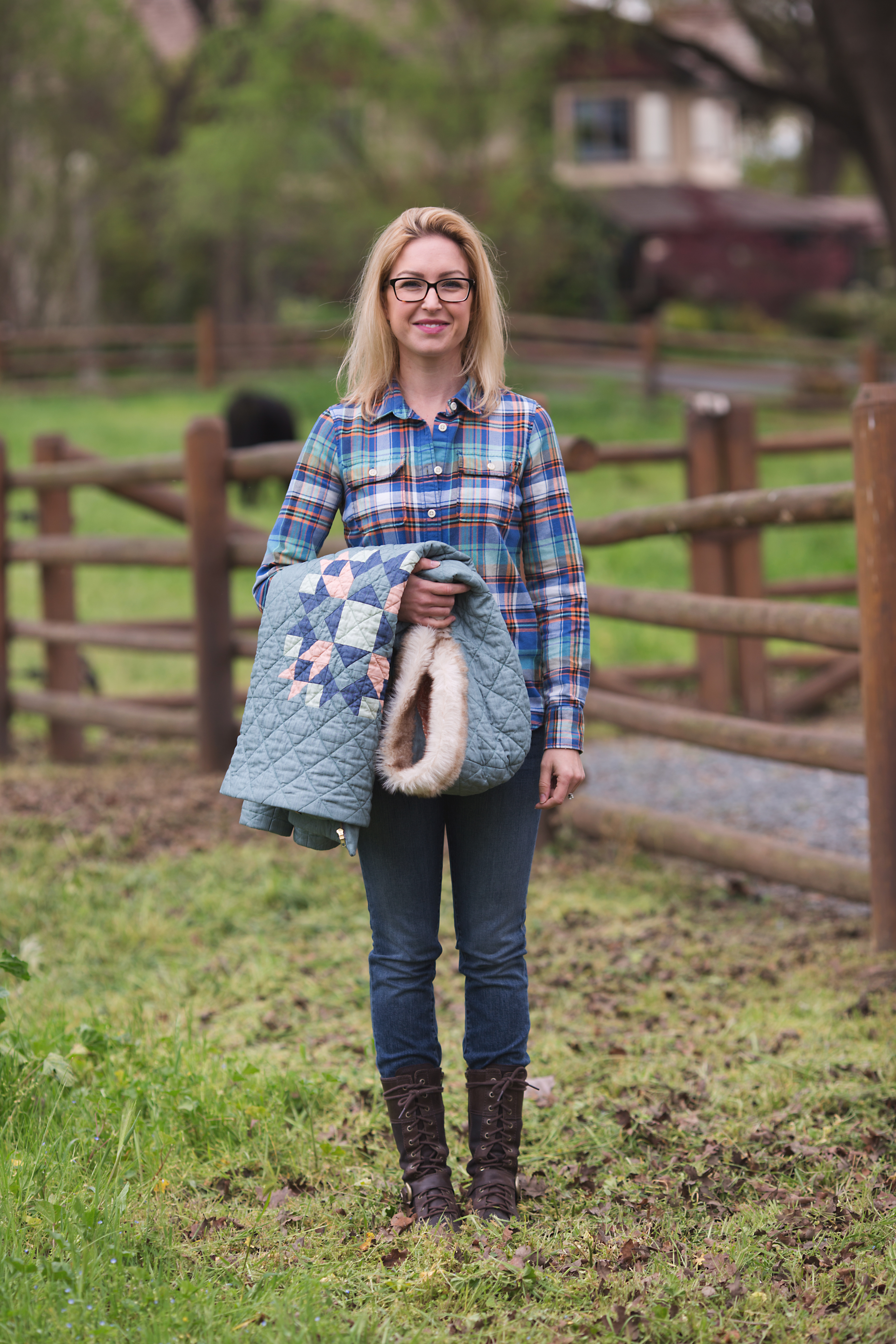 Hi, my name is Jenn Rossotti. I am a peach farmer’s wife and mom of 2 living in sunny Central, California. I learned to sew as a child and have been in love with all things fabric ever since. Here at the Ginger Peach Studio you will find inspiration for the handcrafted lifestyle, sewing tutorials, tips, patterns, quilts, design and more. Thank you for stopping in and I am so glad you’re here.